Life, the Universe and Everything Wiki
Register
Don't have an account?
Sign In
Advertisement
in: Sentient Species, Races That Have Attempted to Conquer Earth 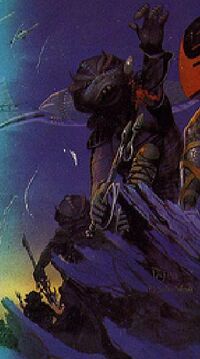 This article is about the species. For a list of Wersgorix, see Category: Wersgorix.

The Wersgorix are the dominant race of planet Wersgorixan and the creators of the now-defunct Wersgor Empire. They are broad humanoids, standing about five feet tall, with hairless and deep blue skin. They have short thick tails and their round heads sport blunt-snouted faces with two long-pointed ears and narrow amber eyes beneath high brow ridges. They dress in silvery-sheened tunics and speak a language also known as Wersgor.

Wealthy and important Wersgorix live in vast estates with a retinue of robots or hirelings, communicating with others as necessary only by long distance or visiting in aircraft. All Wersgorix strive to avoid any menial labor as they prefer being soldiers, estate managers, traders, factory owners, politicians, and courtiers. No one is born to his place in life, however. Under the law all are equal and free to strive as best they might for money or position. This sounds really awesome but in practice results in tyranny, because individuals have no special affection for their birthplace and acknowledge no immediate ties of kinship or duty, and are thus unable to protest any arbitrary decree of a superior. "Promotion according to merit" only means "promotion according to one's usefulness to the imperial ministers".

Indeed, they have even abandoned the idea of families. Each Wersgor lacks a surname and is identified instead by a number in a central registry. A male and female couple seldom live together for more than a few years. Children are sent at an early age to schools where they dwell until they are mature, for their parents more often think them an encumbrance than a blessing. They like plenty of room, which is what motivated them in the past to start the Wersgor Empire by conquering planets, enslaving the natives, and colonizing with only a few million Wersgorix each. Now that the empire has been severely beaten back, they have to either ask nicely for a place to live or just to suck it up and deal.