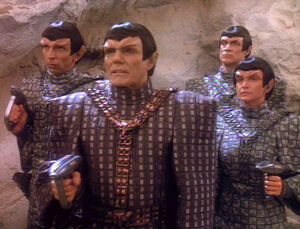 The Romulans (or Rihannsu, as they call themselves) are the less-friendly evolutionary cousins of the Vulcans, and in fact descend from a group of Vulcans that left their planet in the 4th century for refusing to follow the teachings of Surak.

They came to settle on the Romulan System and colonized planet Romulus while enslaving the Remans from the neighboring planet Remus. Over the next centuries, they became the Romulan Star Empire, and established themselves as one of the most powerful nations of the galaxy's Alpha and Beta Quadrants. Unlike the Vulcans, they don't suppress their emotions, although they also value cold analytical skills. Their other assets include secrecy, cunningness, deception, and Romulan Ale.

In the 22nd century, the fought the Earth-Romulan War against (you guessed it) Earth, the aftermath of which led to the formation of the United Federation of Planets. A curious fact about this war is that, somehow, no Earthling ever laid eyes upon a Romulan, not even a dead one, and the physical appearance of their enemies remained unknown. This might be because Reman soldiers were employed, but in that case, it's not known how the Earthlings knew that those were not in fact Romulans. In any case, they only came face to face with Romulans (and found out about the Romulans' Vulcan heritage) over a hundred years later.

In the 24th century, Romulans forged an alliance with the Federation and Klingons to defend the Alpha Quadrant against the Dominion, in the devastating Dominion War. They emerged victorious, but ten years later, the Romulan sun went nova, destroying their capital planets, killing billions of them and severely crippling their Empire.

Retrieved from "https://alienencyclopedia.fandom.com/wiki/Romulan?oldid=9834"
Community content is available under CC-BY-SA unless otherwise noted.