Life, the Universe and Everything Wiki
Register
Don't have an account?
Sign In
Advertisement
in: Sentient Species 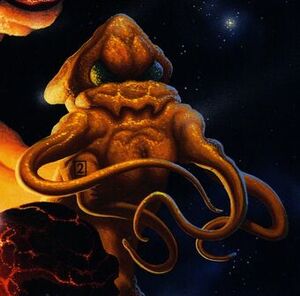 Leerans are the dominant species of planet Leera. They are amphibious creatures with pebbly yellowish slimy skin. They have the hind legs of a Frog, but instead of front legs there are four tentacles spaced evenly around their bodies. There is a big head with no neck, and the face curves outward with a hugely wide mouth that seems frozen in an idiotic grin. Both of their eyes are brilliant green and large. The Leerans make their homes underwater in huge lavish cities, but can use the land to lay their eggs and they also used the continent for commerce with other races.

Leerans can read the thoughts of anyone within a few feet, so for security reasons they are banned from many worlds. This has led to several unsuccessful discrimination lawsuits.

The Yeerk Empire has tried to infiltrate their planet and make them all Controllers, but fortunately the Leerans could sense them coming so they had to resort to a violent invasion in which all of their battle tactics were anticipated. The Yeerks have so far conquered very few Leerans, but those that have been captured make dangerous enemies and nearly divulged the Animorphs' secret, i.e. that they were not really Andalites.