Life, the Universe and Everything Wiki
Register
Don't have an account?
Sign In
Advertisement
in: Earthlings, R. U. Sirius Crew Members, Engineers 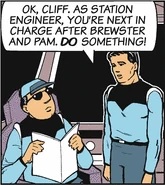 Cliff Clewless is the R.U. Sirius' engineer - a position for which he is completely unqualified. He got his position through his computer-hacking abilities by hacking into NASA's computer and upgrading himself from "programmer" to "engineer". He incorrectly believes himself to be popular with the ladies. He is fat and is invariably shown sporting a cap and sunglasses.

As a result of a facehugger attack, he now has a xenomorph son named Philbert.