Life, the Universe and Everything Wiki
Register
Don't have an account?
Sign In
Advertisement
in: Earthlings, R. U. Sirius Crew Members

Edit
watch 01:36
We're Getting Mutants in the MCU - The Loop
Do you like this video?
Play Sound 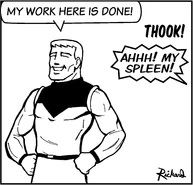 Brewster Rockit is the lantern-jawed and squinty-eyed captain of the R.U. Sirius. He is brave, optimistic... and dumb as a rock. His strong leadership skills are complemented by a boyish sense of humor (and childlike mindset). He graduated from the Air Force Academy and then served in NASA as a space shuttlepilot. However, he failed his intelligence exam because he kept eating the pencils. He originally had the intelligence of an average person, but excessive memory wipes from alien abductions caused him to lose it. According to Pam, he has an obsession with ham.